Growth vs. Value & Large-cap vs. Small-cap

The two graphs are based on data contained in the Backtesting Portfolio Spreadsheet prepared by a member of the Bogleheads Forum.  The spreadsheet provides returns for various asset class combinations for periods between 1972-2010.  The charts compare returns for six asset classes over five different time periods ending December 31, 2010.

For each period except the most recent 5-year period, large-cap value stocks outperformed large-cap growth stocks.  Similar results can be seen for small-cap stocks. 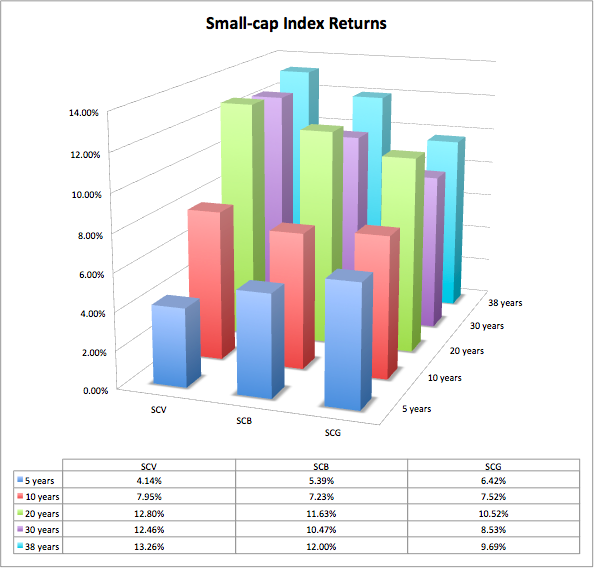 The two graphs also show that small-cap stocks outperformed large-cap stocks of the same type (i.e., value, blend, or growth) for all of the periods except one.

The Backtesting Portfolio Spreadsheet prepared by a member of the Vanguard Diehards Forum has been updated to include data from 2010. The spreadsheet will back test various asset class combinations using actual returns from index funds from 1972-2010.  This is a great resource for asset allocation analysis.

Stockherd is a collection of investing ideas for the individual investor. The site is updated only occasionally.